The Beetle: A Small Car With a Big History 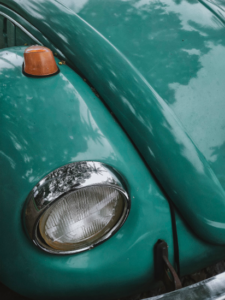 The Volkswagen Beetle has a long and storied history. First rolling off the assembly line in 1938, the “Bug” took many twists and turns before it was officially decommissioned in 2018. We recently sat down with our Nashville-based VW service technicians to find out more about the curvy little car. They told us a lot about the Volkswagen Beetle’s history.

The Volkswagen Beetle has a long and storied history. First rolling off the assembly line in 1938, the “Bug” took many twists and turns before it was officially decommissioned in 2018. We recently sat down with our Nashville-based VW service technicians to find out more about the curvy little car. They told us a lot about the Volkswagen Beetle’s history.

According to our VW repair experts, the Volkswagen Beetle was initially envisioned by German dictator Adolf Hitler. Before he became the most hated man in the world, Hitler commissioned Ferdinand Porsche to create a car for the people. His vehicle was to be affordable and able to carry a German family. Unfortunately, as soon as production began, World War II halted manufacturing, although a few vehicles were released for military use.

By 1946, the war was over, and the Volkswagen factory came under the control of the British government. By the end of the same year, there were more than 10,000 Beetles on the road or ready for sale. Throughout the next decade, more than one million of the now-iconic vehicles were gracing the streets of Europe. VW service shops started popping up all over Germany, Italy, and Austria.

1959 saw an era of growth for the Volkswagen company. Our VW service techs in Nashville explain, however, that an advertising agency in New York had a lot to do with Volkswagen’s boom. An ad, which is known now as the “Think Small” campaign, simply featured a front-facing image of the Beetle surrounded by negative space. Underneath the striking imagery, which has been called the best advertising campaign of the century, were a few simple paragraphs of straightforward copy.

Nine years after the successful advertising campaign, Walt Disney featured a 1963 Beetle in a series of six films. Herbie, the now-beloved anthropomorphic race car, was a self-aware automobile. These movies were further responsible for the success of this German car on American soil. Our VW service shop in Nashville continues to see an influx of 60s model Volkswagens stylized with Herbie’s number 53 on the side.

By the early 1970s, the Beetle surpassed the Model T as the best-selling vehicle on earth. In February 1972, 15,000,734 Beetles had come directly off the assembly line. This included many of a newly-released model, the Super Beetle, which had a better suspension and more storage under the hood.

A few years before the turn-of-the-century, in 1998, the Beetle got a makeover and a new platform. The new 115 hp vehicle was essentially a Volkswagen Golf with the body of a Beetle. In 1999, Mike Myers renewed public interest in the bubble-looking vehicle in the movie Austin Powers: The Spy Who Shagged Me. the VW service pros in our Nashville shop explain that sales rose once again thanks to the 60s-throwback cinematic sensation.

Sadly, the Beetle’s days came to an end two years ago, although VW service remains available for Nashville drivers. The final two models, the Final Edition SE and the Final Edition SEL, were the last of their kind. Or were they? According to our VW repair pros, maybe not. Volkswagen Group of America CEO Hinrich J. Woebcken was once asked if the Final Edition was truly final. His response was rather ambiguous, “Never say never.”

If you are one of the lucky drivers in Nashville to own a Volkswagen Beetle, visit GPO Tuning(German Performance Options) for VW service and repair. Whether you need a simple oil change or want to take your Beetle to the next level with performance tuning, our knowledgeable staff is ready and waiting to answer your questions or to schedule an appointment.