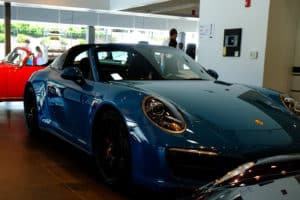 GPO Tuning(German Performance Options), Nashville’s premiere Porsche service provider, says that there are many things about the iconic brand most people don’t know. From how, exactly, to pronounce the name to the one car that will never need performance tuning, keep reading for nine facts about this German automotive marvel.

In English, Porsche tends to get pronounced as a single-syllable. However, according to Nashville’s Porsche service experts, that’s wrong. Ferdinand Porsche lent his name to the brand, meaning it should be said aloud as “Porsch-uh.”

Porsche’s WEC LMP1 numbers are 17 and 18. The vehicles are always painted white. This is no coincidence, nor is it just a stylistic preference. Vehicles that have undergone performance tuning to compete are usually numbered this way as a tribute to the 917 KH and the 918 Spyder. The white color scheme is a German tradition.

The Porsche 911 is one of the most desired vehicles in history. Millions of children are have adorned their bedroom walls with pictures of this futuristic road warrior. But, the car was initially dubbed the 901. That changed in 1982. Vehicles built for that year were completed prior to the official moniker migration.

GPO Tuning’s Porsche service providers in Nashville have seen hundreds of impressive vehicles. But, they’ve never been privileged to lay their hands on the 1973 917/30. This unreasonably fast Can-Am series car could exceed 240 mph and produced an impressive 1200bhp. For comparison, today’s 919 hybrid tops out at 210 miles per hour.

Formula One legend Mark Webber is the proud owner of a 918 Spyder, an impressive Porsche that goes from 0 to 60 in less than 2.5 seconds. His latest acquisition can easily accelerate to 214 mph. With stats like that, performance tuning is probably the last thing on Webber’s mind.

Granted, you probably already knew that Porsche vehicles were impressive on the race track. But what you may not have known is that Porsche holds two records at the Nordschleife. Located in Germany, this 16.12-mile track is considered the most terrifying ride in the history of modern racing.

GPO Tuning’s Porsche service experts in Nashville would love to get under the hood of the 919 hybrid. The performance tuning staff says the honor of looking at a vehicle that could generate 8 MJ of energy and a single lap at the 24 Heures du Mans would be a lifetime honor. That’s enough energy to keep the lights on at an average-sized family home for an entire season.

During a recent trip to Nashville for Porsche service, a German Performance Options customer got curious as to how many races his vehicle’s parent company had won. The answer surprised everyone: 30,000.

Porsche might be famous for its low-lying, road-hugging, and aerodynamic sports cars, but the company manufactured a harder-working vehicle back in the 50s and 60s. Porsche built more than 125 tractors, and the company has also been known to lend designs to both airplanes and forklifts.

If you are looking for Porsche repair, maintenance or tuning services in Nashville, visit GPO today. While we can’t guarantee you’ll generate 8 MJ of energy, we do offer the most comprehensive selection of service options for European import vehicles in Middle Tennessee.